The Group of Lawyers for the Rights of Migrants and Refugees together with AITIMA, the Greek Council for Refugees and the Ecumenical Refugee Program, co-signing the present press release, and in co-operation with other entities, groups and NGOs, carried out a protest outside the building of the Attica Aliens Directorate (Petrou Ralli) from Friday 17 February 2012, 21:00 until 07:00 am on Saturday, 18 February 2012. 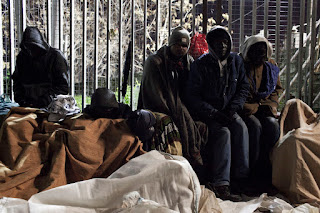 The purpose of our protest was to denounce the situation which those who try to seek asylum in Attica have to face, and which brings to surface the general treatment that State authorities demonstrate towards "foreigners".


The police authorities - following the usual practice of the past years - refuse to register the asylum claims of those seeking protection and only agree to register an exceptionally small number of applications and only during the early hours of Saturday mornings.


During our 10-hour stay outside the Aliens Directorate we made the following observations and findings:


Those seeking asylum are prohibited from waiting outside the entrance of the Attica Aliens Directorate. They are confined to a side street of Salaminias street.


During the night that we spent there, around 80-100 migrants, mostly men but also some women coming from Africa and Asia, waited in line along the street-side. They were exposed to the severe weather conditions, were huddled up the one next to the other, shivering from cold and visibly exhausted. It is noteworthy that during that specific Friday night, the outside temperature was almost as low as 0 C. The migrants who were waiting there informed us that around 50 persons had left earlier, around 18:00, because they could no longer endure the chilling cold.


The majority of those waiting there to have their claim registered, told us that they had been waiting on the same spot for 48 hours and until dawn on Saturday, with access to neither a toilet, water nor food, because they could not leave their position without losing their place in the queue. In addition, the majority of those waiting informed us that they had already waited unsuccessfully to have their applications registered under these same conditions 5 to 10 times. Several asylum seekers told us that they had been coming every week for a whole year but the authorities refused to receive their applications.


Between 4 and 5 am on Saturday morning, more asylum seekers arrived. They explained to us that the police authorities sometimes register the claims of the first 20 persons waiting in the line, but other times they randomly choose 20 claims from the whole queue based on unclear criteria.


Around 6:00 am, the police officers took the applications of the first 20 applicants waiting in line and said in Greek to the rest of the people: "Go away now, next week". The authorities provided no explanation and no answers to the protests of the migrants present, as well as us, who were showing our solidarity to them.


Throughout the whole night, police cars had blocked the way to the entrance of Attica Aliens Directorate at Salaminias street and another three police cars were watching the migrants who were waiting at Annis side-street.


Based on our overnight presence there and our interviews with the asylum seekers who were waiting, we made following findings:


2. The treatment of asylum seekers by the police authorities, in particular the practice of preventing them from even physically approaching the entrance of the building of the Aliens Directorate; the conditions in which they are forced to wait for days, exposed to weather conditions and without access to a toilet, water and food; the arbitrary manner in which asylum claims are then selected and registered in combination with the indifference shown by the authorities; constitute a violation of their human dignity and brings once again to surface the treatment that authorities have in store for "foreigners".


3. The refusal of the authorities to register asylum claims does not constitute a new practice; neither is it a result of some temporary administrative malfunction or of the economic crisis. It is a systematic practice which has been taking place for at least 10 years, has cost human lives and serves the clear purpose of discouraging asylum seekers from submitting their claims in Greece.


4. The procedure under which asylum applications are being registered and examined at first instance remains within the mandate of the police authorities, contrary to the law on the new Asylum Service, which should have been functioning since January 2012.


5. The refusal to allow access to the asylum procedure puts at risk the life and freedom of those seeking asylum and takes away their dignity. They can be arrested, detained and deported at any moment and they are deprived of any social rights. In the end they remain hidden, hunted and held hostage to this wider "discouragement" policy.


This practice of "discouraging" the submission of asylum applications which the Attica Aliens Directorate has been following, reflects a wider policy which the Greek authorities have adopted and which is characterised by "group arrests", overnight conduct of asylum interviews, evacuation of buildings where homeless asylum seekers live, deportation of persons who have sought international protection, refusal to offer reception facilities, as well as practices of refusing entry at the border and lengthy detentions in inhuman conditions.


Such practices serve the wider European policy of excluding "third country nationals" in general from the territory of our European partners, which hypocritically ask from Greek authorities to comply with their international obligations while they themselves at the same time promote harsh measures of aversion and with disregard to human life.


WE HEREBY SHOW OUR SOLIDARITY to all those who were forced to flee from their countries because their life, freedom or dignity were in danger, due to State oppression, war or poverty.


WE HEREBY CONTINUE TO DEMAND


WE INVITE ALL THOSE WISH TO SHOW THEIR SOLIDARITY, EVERY SATURDAY FROM 05:00 TO 06:00 AM ON SATURDAY MORNING AT PETROU RALLI !! 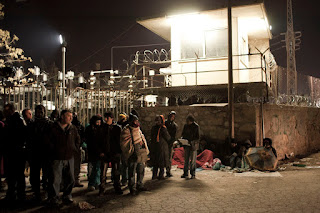