The great difficulty in access to the asylum procedure was the reason why our campaign was founded in 2012. Today, four years later, not only hasn’t this problem been solved but it has greatly deteriorated.
Even though the Asylum Service has already started operating since 2013, it had not been organized nor staffed in a way that it could provide easy access to the asylum procedure to all who wish to apply, as it is prescribed by the law. We note that, even though our organizations have repeatedly submitted to the Asylum Service suggestions aiming at resolving this problem, there was reluctance to engage in a serious dialogue and to find effective solutions.

Thus, in spring 2015, when we were encountered with the major influx of refugees, the Asylum Service was still not in operational capacity to fully comply with its obligation to offer access to asylum. The only reaction of the Service was to introduce the method of Skype, in order to set the appointments for the registration of the asylum claims. In fact, this is practically the only way in which refugees can have access to the asylum procedure. We point out that this practice has been proven ineffective and besides, it denies the right to access the asylum procedure not only to the people that are not familiar with technology or do not have internet access but also to those who repeatedly call (in the pre-determined insufficient hours) on skype without being able to reach the Service. As a consequence, the practice of using skype as the only way to get an appointment for the registration of the asylum claim is basically depriving the persons concerned of their right to access the asylum procedure.
Today, one year later, and after the – long expected by all those who are familiar with the refugee issue- sealing of the northern borders of the country, over 50.000 newly arrived refugees are now in our country. The only legal way out for them is the asylum procedure which, among other things, is also a prerequisite for the relocation and the family reunification procedures, in order to be transferred to other European countries. However, this access is impossible for the vast majority of these people in both open reception centers and asylum offices all over the country.
The problem has now reached alarming levels, given that:
-the refugee population is a much-afflicted population (because of the sufferings from the war and persecutions, the difficult journey towards our country and also the severe deficiencies of our country regarding their reception) which is in a state of great uncertainty.
-a great number of those people belong to particularly vulnerable groups (40% chlidren, a great number of sick people and people with disabilities).
-the documents of a large number of those people have already expired and as a result they are in risk of arrest, detention and deportation, as they are in state of legal uncertainty.

Lately, there have been some efforts from the Greek government to address the problem. In particular the Asylum Service:
·         applies the method of pre-registration of asylum claims and provides asylum seekers with a specific asylum document.
·         announced an urgent exercise of pre-registration of the asylum claims in the open reception centres for refugees, with a time-frame of 6 months for their full registration. However, the implementation of this plan has not started yet.
For our part, we would like to stress the pressing need for an immediate full registration as well as for a fair examination of the asylum claims, in order to grant protection status to all those who qualify for that and to facilitate the fast transfer of asylum seekers to other European countries under the relocation and family reunification procedures. Otherwise, we will face another huge backlog of pending cases, which will aggravate the situation and feed social tensions.
Consequently, it is imperative that the Asylum Service:
-be effectively staffed with competent personnel and also equipped so that it can respond to the current challenges
-change its functioning so that it will serve the purpose of providing refugees with effective protection

That said:
WE STRONGLY PROTEST AGAINST THE ONGOING VIOLATION OF THE RIGHT OF REFUGEES TO ACCESS THE ASYLUM PROCEDURE.
WE CALL FOR THE IMMEDIATE FULL REGISTRATION AS WELL AS THE FAIR EXAMINATION OF THE ASYLUM APPLICATIONS

THE ORGANIZATIONS (in alphabetical order):

Initiative for the Detainees' Rights http://www.tokeli.gr 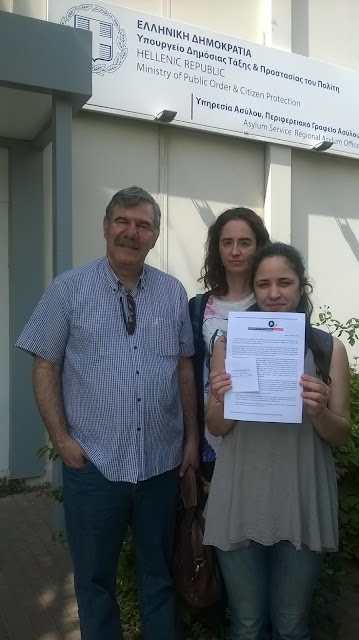